Written Review of DN by our lord and saviour (me)

Written Review of DN by our lord and saviour (me)

-gets home-
-boots up skype & gets in a call-
Friend: Sup
Me: Soup is up
Friend: Neat
Me: What's that game in the background?
Friend: Dragon Nest
Me: Tell me about the game
Friend: It's a MM----
Me: BAH NO MORE MMO SHIT!
Friend: Whoa mate,it's not the same as others!
Me: It isn't?
Friend: Here is a link,try it it will be worth your time
Me: ok
-a year later-
I should write a review about this game!

So here i am talking about DragonNest,one of the only MMO's out there that aren't tools to make you addicted to left clicking mobs for hours,here is DragonNest,a game that should set the bar for future MMO combat systems,but because most people quit before lvl24 cause of the lag and lack of things before lvl24 isn't doing jack shit.

-skill based combat system that allows players to incorporate a lot of thought and skill into their moves (some moves even connecting with others,eg: Tumble + space does Burning Coal for chasers,Tumble + W does Dash for warriors etc) the combat system shines the most in the most left out section of the game,PvP The combat is the only thing holding the game up

-The community is generally fairly mature

-Truly free to WIN (cash items only speed up your progress,they don't affect it ultimately)

-Class balancing: *makes bringer withought knowing they are op,gears him up at lvl 80 with legendary RDN gear all at +15* *Bringers get a HUGE nerf,//quits game* Constant changes that make players quit,and people that play the weakest classes (Kalis) get discriminated and they eventually quit,last time i walked through town i didn't see ANY Kalis/Saints/PvP classes And also,have you ever seen a pre nerf abbys walker in pvp? yeah,ikr.

-Lack of endgame content: Fuck off with nests/raids,they require 8 people to do them every week twice,in which they will get so little of the materials for so much effort,and once you get the endgame regular nest set,the dragon one isn't much better BUT REQUIRES SO MUCH MORE. My point being,you are left there with the question... Now what?

-Even with maxed out gear,you can't go as a lonewolf,so good luck getting 7 idiots together that didn't quit the game yet and are the specific class branches/have the specific builds/gear/skill/knowing of mechanics in the raid to play with you. -laughs in a courner-

-Updates are rare,and often come when the server is at the verge of extinction and when they do come they bring too little content to be bothered with *COUGH* 80cap *COUGH*

-after level caps,all your effort in gaining gear/items is wasted,even your Dragon sets,last time i checked the lvl 80 regular nest set is stronger then the level 70 black dragon set

-Issues with the server: so many freaking DC's... SO MANY  DC'S YOU CAN'T PLAY THIS GAME FOR 4 HOURS WITHOUGHT NEEDING TO RECONNECT,AND IF YOU HAVE A LOW SPEC AND IT TAKES 10~20 MINS TO LOAD DN AND DC IN A RAID,WELL FUCK YOU SIR -DN 2013-2015 (still haven't patched that shit

-PvP: this could have been the best aspect of the game if the devs weren't like ,,PvP? ah fuck it lets put it in last minute in this latest patch'' seriously,at one point the bringer inbalance in pvp was THAT BAD that the game LIED TO YOU... In ladder during the pre nerf bringer era,the ladder screen showing what players are in ladder and what classes LIED,THERE WASN'T AS MUCH KALIS AS BRINGERS... no my friend,99% Bringers 0.50% gladiators & moonlords 0.25% Rippers & Raven's 0.25% everything else... Even the bear bones we got out of PvP was so much enjoyable if you found a guy the same class as you! And it is a damn shame.... SHAME SHAME SHAME SHAME SHAME... SHAME

-Dying community because of all of these reasons ^^^

To be honest with you the sole reason why i am still playing this game (not so much this month) is 60% because of the guild,40% because of the combat system. This game lays down a lot of foundation on something that could get improved on and grant us something so much more better! But in the end,the execution of what to do with the foundation was fucked up. From the clearly rushed and untouched PvP,lacking of endgame,class discrimination and lack of balancing,rare updates,disconnection issues and a dying community i reward DragonNest a 5/10 (Average) If the combat system wasn't the thing holding the game up,the game would probably get a 4/10 or even a 3/10 from me.
_________________
i'm not 12,i'm 15,deal with it. 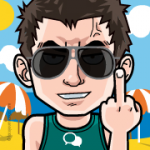